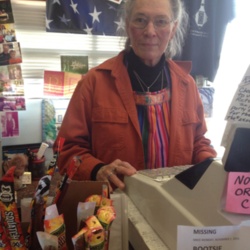 Dorothy Smith was born in 1950 and grew up in Atlanta, Georgia. She was one of the first women admitted into Georgia Tech. After receiving her degree in Materials Engineering, Dorothy worked at the Oak Ridge National Laboratory in Tennessee, where she made diamonds and other crystals for experimental use. She moved to Cooperstown, New York and was a stay-at- home mother to four children, and she now runs the cash register at Spurbeck’s Grocery. In this story, she talks about studying science.
DS: Well, at the time I went, it was shortly after girls were admitted. Girls were not admitted to Georgia Tech. They were supposed to go to a liberal arts school. So there were fifty girls and five thousand boys, but that didn’t seem to make any difference. I took all the same courses. I graduated in Materials Engineering and never had any problem and never really any harassment or anything. So it was a good place to go to school, and I enjoyed all of it.
KC: Why Materials Engineering?
DS: Well, that’s hard to say. Actually I was interested in chemistry, but the chemistry program was still closed to women because there was a similar program at one of the other Georgia state schools. So I took materials. It was ceramics and metallurgy at the time. It’s now combined to materials.
Click here to listen to the full interview or to read the transcript.