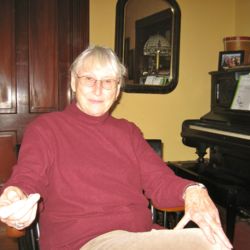 Dorothy Hudson was born in 1937 and spent her childhood in East Brunswick, New Jersey. She moved to Cooperstown, NY in 1974 and began to volunteer in local organizations. In this story, she talks about her work with the League of Women Voters.
DH: When I was in the League of Women Voters back then we were talking about voters’ rights and the environment. Another thing we’ve succeeded in, we were paying a lot of attention to the voting machines, because our voting machines were getting old and decrepit. And after the Gore-Bush election the government paid a lot of attention to the voters’ rights.
So they said our machines, we couldn’t use them anymore, because they weren’t handicap accessible, which they aren’t. So locally they said, well we’ll just get nice computerized machines, and some of us in the League and Verified Voting Group realized that those machines were hackable. We worked very hard, we did a lot of praying as much as anything, to not get just plain electronic, computerized machines, to get the paper ballot, which can be counted. Whether they are or not in a close election is another question. But they can count them.
I at least feel like we’ve accomplished something on that line. I feel very comfortable lobbying the government to do what we think is the right thing.
Click here to listen to the full interview or to read the transcript.