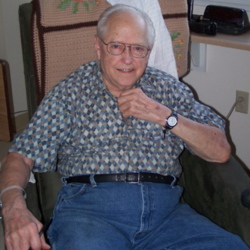 Glenn Harrison was born and raised in Mt. Vision, NY. His family has lived in Otsego County since the 1790s and has been very involved in various agricultural industries, including running dairy farms. He was also active in various community organizations, such as the local Methodist Church and the Grange. In this clip, he talks about working in a lumber mill and on dairy farms.
KW: What was your job in the lumber mill?
GH: My brother ran the carriage that you run the logs through. I took the edging off the sides of the board. I took them off and carried them over across the middle there and put them on another saw, which cut them into wood. People wanted to burn wood.
When this next generation got married and had families of their own, they bought neighboring farms and worked to produce milk with cows. After their own milk was delivered to the railroad in boxcars. Nowadays, they take it in tanks, but then I had to put it in ten-gallon cans and take your horses and go to town. When you got there, it had to be cooled, so the railroad had to furnish ice cubes, chunks of ice. And you put the milk in there and pack it with these ice cubes. Of course, the milk had a tendency to be warm and would warm the cans up and melt the ice, and it was a constant raining down under the cars, the water running.
The farms were bought after another generation went by. The younger generation bought up neighboring farms, and they would produce milk. That is how they got their size and continual production. Milk was delivered to railroad cars and the tracks and the ten-gallon milk cans with horses and light wagon. The railroad had cars with plenty of ice cakes placed around the cans to cool the milk. The milked cooled for the transport while the ice ran off onto the railroad tracks. This milk on the train was on its way to New York City from Mt. Vision.
Click here to listen to the full interview or to read the transcript.