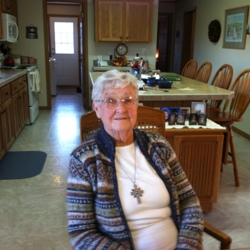 Dorothy Bolton is a lifetime resident of Burlington Flats, New York. She grew up as the daughter of a maple syrup producer and married a dairy farmer. Though farming remained a major aspect of Mrs. Bolton’s life, she held a career within the Edmeston school system for 32 years. She held various positions within the school from cafeteria worker to classroom aid to her final position as secretary to the guidance office. In this story, Mrs. Bolton is talking about her neighbor’s father and his sheep.
DB: Her father, she lived with her father, he was old and he was a little bit on the cranky side. I was sort of afraid sometimes to go over there but Lila says, “Come on, he really doesn’t mind. He’s just sort of cranky.” Well, he was sort of cranky, but I went over there and I learned how to play a lot of card games. When they moved down from up on the hill, it amazed me, they said, “The sheep were coming.”
And I said, “What sheep?” Well, they owned sheep, way up on the hill, and it was probably two miles. They drove them down the road. It, of course, was a dirt road. Sheep, they were driving down the road, down and put them in a barn behind the house the right there in the village. And you see sheep coming down the road, herding them like cows. It was amazing to me because I was a little girl then. I thought that was the biggest event of the year, having sheep come down the road.
Click here to listen to the full interview or to read the transcript.