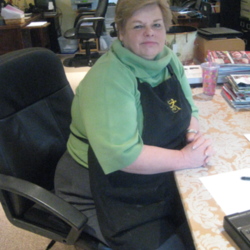 Carol Waller was the first female mayor of Cooperstown, New York. She was born in Queens, New York in 1946 and grew up on Long Island. She moved to Cooperstown after marrying, and has worked in the floral industry in addition to holding political office. In this story, she talks about how she became interested in local government and overcame her fear of holding a political office.
CW: When we moved backed from Colorado; my husband was very active before we left. He was a volunteer fireman, he was a Lion, and he was all those things. And when we moved back he said to me, why don’t you get involved, the kids are old enough to get involved in different things. So my father being in politics, we always talked about politics a lot, said why don’t you run for village board? I said I don’t know a thing about that. So I did. I ran for trustee. I thought, oh I’ll give it a try, how hard can it be? I need an outlet from this to take my mind off the flower shop 24/7 to have my mind go somewhere else. I only won by two votes. That was the election. I drank a little too much the night I won, because I was like, oh God what am I going to do now, I’ve won. I went to my first meeting, I was so scared. Thought oh I’m going to screw this up. There’s a 4-million-dollar budget! I got put on finance my first year, oh my lord. I got put on police. I was a nervous wreck.
Had a mayor, him and I have come to terms, but [he] put me on entertainment. Entertainment then used to be planning and entertainment. Entertainment was getting a cup of coffee and he said to me, “you can go get me a cup of coffee.” I got him a cup of coffee and I said, “it’s the first and the last I’ll ever get for you.” I’m a little bit of a woman’s libber when it comes to that. I found it very fascinating. It taught me tremendous patience. There, you’ve got to go through this committee, that committee, this regulation, that regulation. It taught me how to listen. It taught me how to open my mind. A lot of times I would look at everything, make up my mind, and I’m very stubborn and I’d say that’s the way it’s got to be. But in government, you have to listen to the people. So when you listen to the people you realize that there’s more opinions out there. Sometimes, if you listen, some of the things you’ve made up your mind about are wrong.
Click here to listen to the full interview or to read the transcript.