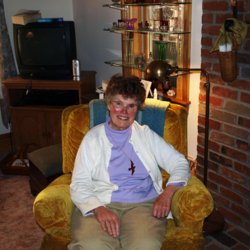 Mary Ellen Fenner was born in 1929 in Cooperstown, New York, and raised three children in Herkimer, New York. Mrs. Fenner attended Oberlin College and Cornell University. She is a talented musician and has played an active role in her community. In this story, she talks about continuing her education in her retirement by reading books.
AW: It seems after he retired you guys kept pretty busy.
MEF: Yes we did. Actually very busy. Someday too busy. You know, it just, uh, well, it doesn’t matter. I’ve been doing a lot of reading lately or trying to.
AW: What type of reading?
MEF: Well I’ve read two of the most wonderful books lately. I read the book on, uh, the second President of the United States, you know.
AW: John Adams?
MEF: John Adams. What an interesting character, oh, I just loved him. So then I, someone over there, somewhere I heard a review on the one on Ben Franklin by Isaacson and that’s the one I’m almost finished with now. I can’t say that I like that character as well. But he’s, but it’s certainly an eye opener to how things were like in those days. One thing I didn’t mention to you is that when I went to Oberlin I had hoped to major in history.
And my history teacher was this over-educated person who used to—I say that because he had this big reputation. He’d pace back and forth and lectured every morning at 8 o’clock, five days a week. And when the first exam came, I couldn’t  I didn’t know how to think in concepts in those days and I thought I’m never going to make it, you know, as a history major. Which is really too bad because I think with a little, with the help I got from the English teacher, I learned more about concepts then and that I ever had before and seemed to be reason more effectively than I did then. So I’m making up for lost time.
AW: Do you have any particular favorite era of history?
MEF: Well I’ve been interested in this one right at the moment. Uh, I don’t know it depends. I buy too many books, I know that. And then I get sidetracked by Cindy who’s a school librarian—I guess I didn’t mention that. And, so whenever she has a new book she recommends, and she recommend one recently which I bought called March by somebody named Brooks. I don’t know what it’s about because I just have it and it’ll probably be the next one I read. But it’s probably, not a teenage book, she’s dealing with high school students.
And the last one she recommended that was just wonderful was called The Book Thief, have you ever heard of that book? Golly that’s a nice book. So that’s fun just going back and forth, you know, between the stuff she’s letting me read. See her stuff is easier to read than Franklin. This book I got kinda bogged down with—strange character. But anyway I guess now I’ve covered everything.
Click here to listen to the full interview or to read the transcript.