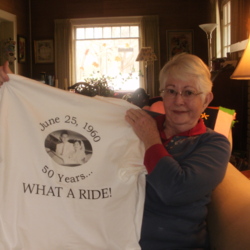 Fran Plank was born Francelia Roiter in Schenectady, New York in 1938. She attended the University of Rochester and worked as a teacher for a while before raising children. In this story, she talks about making mischief as a child and what she learned from her punishment.
FP: I had a good time in school. One thing I do remember, if you can believe it, I had long black ringlets halfway down my back which my mother always put up on rags which I also did not like very well. She always put a big bow in my hair when I went to school. Well, I didn’t want any big bows in my hair so I took them off, stuck them in my desk and then toward the end of the school year, I had this desk full of bows. So now what am I going to do? So I took them and I stuffed them down the storm drain on the way home from school.
Another thing I would do on the way home from school, I was curious and I liked to check out people’s bathrooms, so I stopped at a different house every several days on the way home and asked if I could use their bathroom. Well, one day I must have hit the same person twice and she told me she thought I could wait until I got home. So I thought, well okay, I guess we won’t do that anymore! One other time, and I was only in first grade, a new family had come in and there was a little girl in kindergarten that I was supposed to pick up and bring home from kindergarten. Well I didn’t remember, I totally forgot. I got home and I guess her mother called my mother, well where was Carolyn? And I said well I don’t know, maybe she’s hiding in the clothes basket in the basement. Well, the truth came out and I was back in my doghouse.
OC: So did your mischief ever get you into trouble?
FP: Oh yes! I just found out a short time ago that one time my sister really ratted on me. I was in what we would call junior high then and was going to go to a movie with some friends. But I liked to buy comic books and my mother would let me buy one once in a while. Well, one day I decided I wanted some more. My sister said she went with me, I don’t remember that, but I guess she probably did. My mother, she was pretty savvy, she knew I was up to no good. So I went and bought some comic books and she found out about it and I did not get to go to the movie. My sister did, my friends did, and I got to go to Sears with my dad! So sneaking didn’t work real well.
OC: So would you say that your parents were pretty strict?
FP: They were very fair. I would get spanked. A really annoying thing is I can never remember a time when I didn’t deserve it. They were very, what shall I say…consistent, you know? This is good, this is not so good. You do this, you’re fine and dandy, you do this, well, you take the consequences. So I learned very early on that I better be ready to take the consequences if I was going to get myself into jams.
Click here to listen to the full interview or to read the transcript.