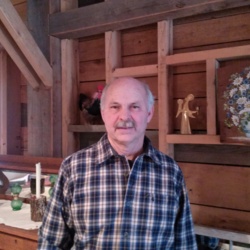 David Ingalls was born in 1949 and grew up as the third generation to work a farm in Cooperstown, NY. He went to college and returned to the farm, also working as a school guidance counselor for 35 years. In this story, he talks about returning to the farm in the summer while he was at college, and the conversations he had with his father about the Vietnam War.
DI: Coming back, my first year back from college, it was hay season and they were long hard days. My dad and I were about to load hay in the haymow. And, you know, there are two tons of hay bales, and my dad pushed them up the elevator. It’s about ninety-eight degrees in the haymow, and all that hay dust, and you’ve got to stack two tons in about twenty minutes.
I can remember saying to my dad before I went up, I said, “Dad, you know, I’m a college boy now. Isn’t this a job for the hired man?” And my dad had a tough side to him. He said, “Well, the hired man was here for the five o’clock milking this morning. Where were you?” And then, he said, “I want you to hear me real clearly. If you are too educated to stack hay bales, you’re too educated for your own good.” So he said, “Get up that mow.”
Then he said, “Get rid of that bandana, because there won’t be any hawks living on this farm while your brother is in Vietnam.” The objectors to the war, and we probably all should have been, wore these bandanas around their forehead. Well, mine was a drip strip, for when you were working the mow. But my dad took the metaphor as being from that perspective. And having gone down to New York to go to school. So that was my dad’s political position, coming from a military background, and at that time thinking that we were doing Southeast Asia a favor and the nation a favor by helping the country of Vietnam become an independent, self-determining country. And so my dad—you didn’t have to ask him where he stood on issues like that. But I always had a good relationship with my dad.
DR: Did he express an opinion when your brother joined the military?
DI: No, he was drafted. Back in that day and age, in the later sixties, we had about a hundred and forty, two hundred and forty-five body bags a week coming back. So it was a volatile time for young people, because in that year, you couldn’t vote until you were twenty-one. But you could be drafted at eighteen and go and die. You could buy beer that year at age eighteen. And they turned it around—you can vote at eighteen, but you can’t drink until you are twenty-one.
The issue was, how many people for which reason? Drinking and driving, or military? But my dad was always supportive. He did vote politically, carefully. He was always supportive of where the government stood on issues like that, including my brother.
Click here to listen to the full interview or to read the transcript.