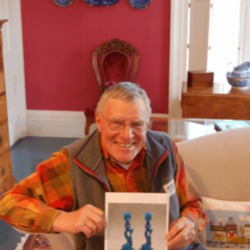 Roger MacMillan was born and raised Schenectady, New York in the years surrounding World War II. He received a medical degree from Columbia Medical School in 1965. MacMillan moved to Cooperstown, New York, to work at Bassett Hospital. In his story, he talks about learning from his patients.
RM: I graduated in the class of ’65. We were trying to learn to become doctors. It was the Kennedy era and all of that, so we didn’t have too much political stuff going on. I remember Kennedy was assassinated, that was a day I’ll never forget, like everyone else. And that was the day that I learned a lesson as a doctor that every doctor should learn. Will learn, but certainly by listening to this story will never forget.
I had a clinic called Well Baby Clinic, this was when I was in pediatrics, and the mothers would bring in their 4-6 week old infants who were allegedly well babies. And you would ask, “How are things going” and listen and check them all over, and the baby was in fact a well baby. I came back that afternoon and I think the clinic started at 1:00, I can’t remember. Anyway, I looked at my roster and I had a mother with a baby in the room already waiting for me. And I suddenly heard an urgent page, a voice page because we didn’t have phone pagers, so I heard all these urgent pages for H. Huston Barrett, a professor of neurology, and J. Lawrence Poole the professor of neurosurgery. And I’m saying, what the hell is happening with these urgent pages?
Well, basically Kennedy had been shot in the head and they were calling for the neurologist and surgeon, and the idea had been that a plane was being readied. Incredibly quickly. The plane was being readied at LaGuardia and they were going to fly these guys to Dallas. Well of course, then he died, so they stopped that whole deal. So I walk into this mother, Kelsey, and I say, “Mrs. So-and-so, you’ll never believe this news, President Kennedy has just been assassinated in Dallas and he’s dead!” And she said, “Oh isn’t that something. Now, Doctor, about my baby…” You see? You learn the priorities really quickly. Even though the President of the United States had just been assassinated. You learn right away what people’s priorities are in life. It was a very, very good lesson that I learned that day in about two milliseconds.
Click here to listen to the full interview or to read the transcript.