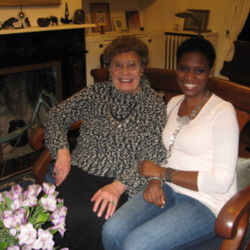 Hilda Wilcox was born in Utica, New York in 1929 and moved to Cooperstown with her husband and three children in 1969. She taught English at the University of Texas, Wagner College, and SUNY Oneonta. In this story, she talks about fighting for Civil Rights and what it was like to teach during the early days of integration at the University of Texas.
TJ: Was the high school just starting to be integrated at that time when you started?
HW: The high schools? I think in that part of Nassau County…I don’t remember ever seeing a black student. But you know I was a member of the NAACP when I was 15 in Utica, I think I told you that before, so, it was a very exciting thing that happened at the University of Texas because at that time it went over the international news circuit that, I think I told you, the girl who got the part of Dido in Dido and Aeneas. She’s from some place in North Africa, Dido, and Aeneas … she loved Aeneas. The girl who got it, her last name was Smith, she was black and she got the part of Dido and it was perfect.
The graduate school, like the school of music, was already integrated during the first year I taught at the University of Texas. But the legislature was determined that she would not play that role in the opera. But she had already won it. So this was a real problem and they had a faculty meeting and the auditorium was just filled with professors and the president of the university, you know, tried to finagle us into saying that it would be all right to have somebody else take that role. And, very quickly, there was a first to support that motion. But then this man stood up, who later turned out to be a conservative president of Boston, I can’t remember if it’s Boston College or Boston University. I think it’s Boston College I’m very bad at names now. So I cannot remember his name, but he was told that he was out of order. There wasn’t to be any discussion, but he went on talking, which was the bravest act I’ve ever seen.
TJ: He was in support of…
HW: To support discussion for the girl staying in the role. But then they had a vote and it was overwhelmingly to support what the president wanted, because his argument was that if we just go along with what the legislature says, and they had threatened to withdraw funds from the music school if we didn’t go along, then later on it would be easier to make our own rules kind of thing. If we just cooperated [laughs].
There were eight people still sitting, I can still see them they were sitting towards the front. I was sitting towards the front and we were still sitting when everybody else left. And we looked at each other. We were deeply moved to feel that we were in a very special group. It was against the law by the way, to belong to the NAACP if you worked for the state of Texas. Can you believe that? It was against the law or at least against the rules of the university, I don’t remember which.
Click here to listen to the full interview or to read the transcript.