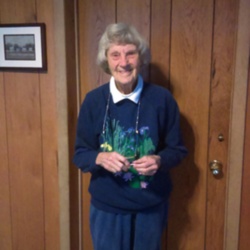 Ellen St. John was born in China, where her father worked at a university.  She and her family moved to New York City in the 1940s and she has lived in the United States ever since. She became a nurse and moved to Cooperstown, NY to work in the hospital there. Every Wednesday, she takes part in an anti-war vigil outside the Cooperstown Post Office. In this story, she explains why protesting is important to her.
AC: Why do you think it’s important to go out there week after week when you’re protesting in Cooperstown?
ES: I can’t not speak out in a democracy. I don’t think we’re a democracy if we don’t speak for what we believe is right, work for what is right and not just hide out. Otherwise we become just an oligarchy where the people in power have all the say.
AC: What are the types of responses you’ve gotten in Cooperstown since doing these vigils outside the Post Office?
ES: Well, at first when we started vigiling we had many people who came and scoffed at us and called us unpatriotic. Some of them, there was one woman who actually spat on the sidewalk she was so angry that we weren’t doing what the government wanted us to do. It’s too bad that we think of patriotism as following everything the government tells you to do. We need to realize patriotism means trying to make your government your country as honorable and strong and friendly as any other country could be. To make it a peaceful country is, I think, patriotic. Occasionally people would come from across the street where the National Baseball Hall of Fame is, because in the summertime we have a lot of tourists, and sometimes from other countries. There was a Swedish family that came across the street to us because we carry signs and they said “What are you doing?” and we told them exactly what we were doing. “We didn’t know that anybody would do this in your country. We must go back to Sweden and tell them there, there are people that don’t like the war.” It was funny.
Click here to listen to the full interview or to read the transcript.