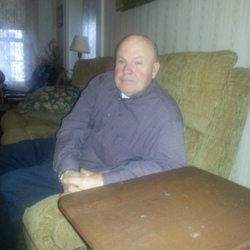 Orrin Higgins was born in 1940 in Hunter, New York. He worked in law enforcement for more than twenty years. Higgins was a state trooper, a judge, and the town justice of Hartwick, New York. In this story, he talks getting a television.
OH: I grew up right after the Second World War. We grew up poor and we were very lucky, I guess, to eventually have a TV in the home, and that made quite a change for us all, just having a television in the home. We were in there watching Tom Mix or Roy Rogers or Lassie or some of those other shows at the time.
Click here to listen to the full interview or to read the transcript.