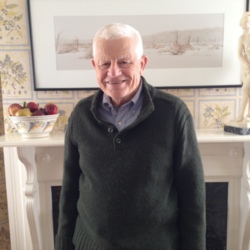 Earle Peterson was born in 1933 in Yonkers, New York and grew up on a farm. He has a doctorate in veterinary medicine from Cornell University, and he worked as a veterinarian on farms and in an animal hospital. He established the Greenwoods Conservancy in Burlington, New York and was one of the founders of the Otsego Land Trust in Cooperstown, New York, both of which are dedicated to protecting the local environment.
EP: The school bus came within a mile of our farm, so I only had to walk a mile to the bus. Bus kids were basically farm kids, and when you went to the high school, there were town kids and bus kids – farm kids. And the farm kids, I recall that when it came time for me to go to high school, they said “He’s a farm kid, he’s going to take Ag and Shop as his major.” Whereas the town kids, they would be saying, “They’re going to go college and they’re going to go to business school, and they’re going to become secretaries and whatever,” but the farm kids were expected, I would say they dumbed us down.
I didn’t know what a college was—even though my mother had attended college, and she had majored in, of all things, Classical Greek and Latin, which was an acceptable thing for a woman to do. It wouldn’t be acceptable for her to take many of the other majors that are open to young people today. But she never really got an opportunity. She did teach. She taught English to young Swedish immigrants, and it was there that my father met her, taking a course in how to speak English, and that is how they had met.
In high school, I majored in Agriculture, that’s what you did as a farm kid pretty much, and two of my teachers, a History teacher and an English teacher, had sent to Cornell for an application and applied to Cornell on my behalf. I didn’t know it, and two of the most important businesspeople in the village had been recommenders for me. And so, I went to Cornell. I was the first person from our village who had gone through grade school in the village to go to college.
Click here to listen to the full interview or to read the transcript.