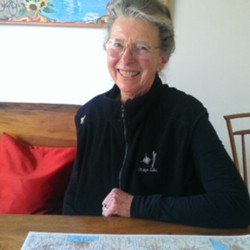 Erika Heinegg is a German immigrant living in Oneonta, NY. She was born in 1934 and left the country at age 18 so she could become a nurse. She lived in Sweden, England, and Canada before moving to New York State. She was able to become a nurse, although she was not allowed to do certain work because she was not born in America. In this story, she talks about the problems she faced due to discrimination.
EH: I decided this was my opportunity to get a nursing degree because my English experience was not accepted in this country. I graduated in 1977 from Hartwick College’s nursing program. I was accepted to the public health nursing service in Delaware County in Delhi.
The first 6 weeks or so—I don’t know whether it was 6 weeks or 6 months—was sort of a trial period. When I had that interview, my superior took me into her car outside the building and told me that I could work for six months. She found nothing wrong with my performance except that her father had told her that I should never be promoted. If I were to accept that, I could work in public health. When I asked why I would not be promoted, she said, ‘Because you are German. My father doesn’t want me to promote you because you are German.’ In 1977, there was very little one could do about that, but I had my children. My husband had a job, so I had to accept that position.
Well, when we first came to this country in 1960, what happened was, my husband was Catholic. I was Lutheran. When we got married, we got married in a little chapel next to the hospital in Rochford. The priest, who was a monk, when he heard that I was a Lutheran and my husband was a Catholic, he moved his chair 12 feet away because he was afraid of us going to infect him or something and almost didn’t want to marry us (laughing). But those were scenes that people lived with, and fortunately, 30, 40 years later, we have learned a little bit more not to do that but still it took a while. We had to learn. Everybody had to learn these things.
Click here to listen to the full interview or to read the transcript.