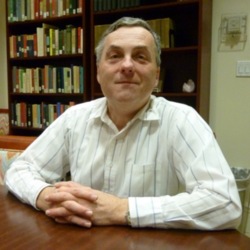 Wayne Wright grew up in Oneonta, NY in the 1950s and has lived there his entire life. He went back to school after being drafted in the Vietnam War. He worked at the New York State Historical Association Library for over 30 years, and is now retired. In this story, Wayne describes his love of children’s books and the lessons they teach.
WW: The other thing that I have done for years was work on a bibliography of children’s author Thornton Burgess and I did this bibliography. This was my graduate thesis. A thesis can turn into something that has a life after a thesis because I had mine published and this is the second edition that was published in 2009 and I describe the works of Thornton Burgess who wrote animal stories. He was one of my favorite authors when I was a boy and I know everything about every edition of every book he ever wrote. Like how many pages it is and who drew the pictures and all those things. There’s lots of things to do in life. With that I found something that nobody else knew anything about and you can become the expert in it if you find something that nobody knows anything else about.
JL: Was there a common theme in Thornton Burgess’ books?
WW: He was very interested in teaching people about wildlife and he also put a little bit of moral values into each of the stories. He tried to teach each of his readers right and wrong through reading about animal characters who sometimes did wrong and how they learned from them. He tried to teach not only about wildlife but just how to be better citizens. I guess I always appreciated that. His books have been ones that I have read since I was really small. I have always liked all kinds of children’s books.
Click here to listen to the full interview or to read the transcript.