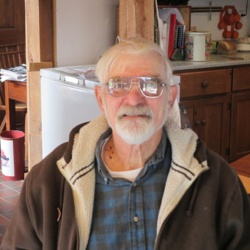 John Dunlap was born in New Rochelle, New York in 1940. His dyslexia had a major impact on his education, and with the help of teachers he graduated from the Taft School and attended Johns Hopkins University. When the Vietnam War began, he joined the Air Force and became an officer. After serving for nearly five years, Dunlap came home to the United States but was unhappy with civilian life. He taught English in Laos and Indonesia before moving to Cooperstown, NY. In this story, he talks about what motivated him to teach.
JD: I went to school in a private school. Thornton-Donovan School, an interesting place that was run by two ancient ladies from England, wonderful, wonderful people. I was a dyslexic kid. I had lots of problems and Bertha, the eldest, I think, no, the second of the girls, she was about eighty-five, and she taught me how to read. I was quite a burden as you can imagine. Dyslexia wasn’t even [recognized as a disability]—they didn’t have any idea what it was. It kind of relegated people who had that kind problem….Dyslexia really had an effect on me for a long period of time.
Oh how I got into teaching… Well, I was prepared to teach when I left Hopkins. I mean it’s a good school, not that I was a topnotch student, I was a goofball a lot of the time. I think it had something to do with the fact that I was a dyslexic kid and teachers really made the difference in my life. I was a difficult child, because of that, you know. Now they have names for it, I don’t know. So, it seemed like a reasonable way to go.
Click here to listen to the full interview or to read the transcript.